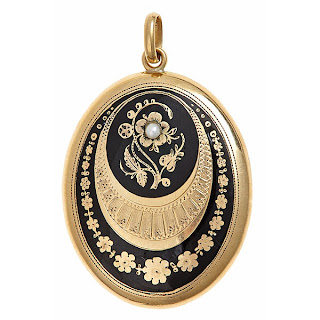 For our first post, I wanted to choose a classic Victorian piece. This gold and black enamel locket is beautiful and exemplifies many signature characteristics of the time period. The Victorian era spans the reign of Queen Victoria, from 1837 to 1901. This locket is from the mid-Victorian era, which began in 1860. This period was marked by a time of mourning, particularly after the death of Queen Victoria’s husband, Prince Albert in 1861. Queen Victoria popularized new standards of mourning attire after a death of a loved one, including wearing all black. Jewelry was to be worn sparingly in mourning, but black jewelry was permitted. Mourning lockets grew in popularity as mementos of loved ones, often with either images or a lock of hair of the deceased placed inside. After the official mourning period ended, a piece like this would still be worn to continue the memory of those who had passed

This 14K gold locket (which is American-made, since English jewelry of this era is 15K) has both detailed engraving and black enamel of a type called Taille d’epargne. The black enamel fills in “channels” making it lie flush with the surrounding gold. The center of the largest flower is set with a seed pearl, which were often used to symbolize tears. However, jewelry of this type was popular for not just mourning attire, but also romantic tokens and everyday fashion, and it can be difficult to determine the original purpose of a piece like this one. Here, I believe the pearl does not necessarily represent tears – the floral motifs and engraving suggests a lighter, more carefree and romantic spirit. Lockets like this one have a timeless beauty making them wearable today, and the meaning can be left open to the wearer. Wear on either a short or long chain for a stylish look. For this and other lockets, check out pratherbeeland.com!