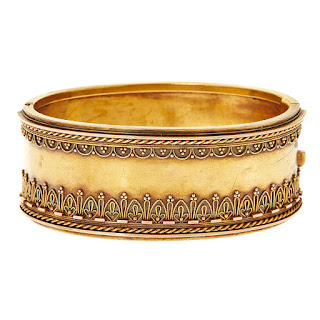 I am just crazy about this bracelet! Gold bracelets are perfect for every day, but this one is extra special. Created in the Etruscan Revival style, this English bracelet is 15K and has beautiful applied metalwork. Etruscan Revival style began in the 18th century after the beginning of intensive excavations of Herculaneum and Pompeii, cities destroyed by the eruption of Mount Vesuvius in AD 79 and then lost for centuries until their rediscovery. Motifs uncovered in these two cities and elsewhere in ancient Italian ruins began to be used in the decorative arts.

One of the most important characteristics used in Etruscan Revival jewelry was granulation, a technique used by the ancient Etruscans. An Italian jeweler named Castellani was one of the first to study the uncovered artifacts, and he became interested in recreating the granulation technique. Granulation is created by adding small amounts of metal of the same type as the base to the surface of a piece of jewelry, creating a decorative pattern. Although Castellani and his followers could not reproduce the technique in the exact method used by the Etruscans, they were able to recreate the appearance of the ancient design. The trend of expressing the popular passion for archeology through jewelry would continue through Victorian era. For this and other beautiful Etruscan Revival pieces, check out pratherbeeland.com!